Founder of the Four Bridges method for Yangqin

Li Tingyao is a well-known dulcimer and founding director of the Taiwan Dulcimer Association. Born in Shanghai, he studied dulcimer with Ye Hengfeng at a very early age. After moving from Shanghai to Hong Kong in 1978; he was selected as the “Hong Kong Elite” to represent Hong Kong among dozens of countries each year. He since joined the Hong Kong Government Music Office and the Hong Kong Chinese Orchestra.

Li Tingyao is also the commander of the North District Chinese Orchestra, the Hong Kong Government Music Office Coordinator and the Hong Kong Chinese Orchestra Musician. In 1983, he came to Taiwan to hold a concert; and for the first time introduced the four-bridge big dulcimer performance to Taiwan. For the first time, the big dulcimer playing method was introduced to Taiwan; and the successful 403 type soundless dulcimer was studied.

In 1990, he participated in the Rhodes International Talent Competition in South Africa and won the professional group championship with the dulcimer. He joined the Taipei City Orchestra in 1995. In 2001, he served as the founding director of the Taiwan Dulcimer Association. In addition to performing and teaching, he also been a record producer.

Li Tingyao, artistic director of the Taiwan Dulcimer Orchestra, invites you to learn the Yangqin, a traditional Chinese instrument. 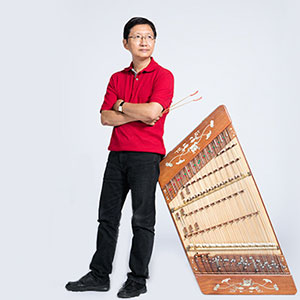